NORMAL (Oct. 19)—Cheers and toasts broke out on the prairies of Central Illinois as an Amtrak VIP train full of elected officials, railroad managers, union officers and media hit 111 miles per hour on the Union Pacific Railroad’s main line between Dwight and Pontiac.

U.S. Transp. Sec. Ray LaHood headed the on-board delegation that boarded the train to celebrate commissioning of the first 18 miles of what ultimately will total 284 miles of track protected by a Positive Train Control (PTC) on the Illinois Dept. of Transportation’s Chicago-St. Louis Lincoln Service route.

The short stretch, which is being protected temporarily by Union Pacific’s Cab Signal system, later will be converted to an advanced PTC technology already in use on 97 miles of Amtrak’s Chicago-Detroit trackage between Porter, Ind., and Kalamazoo, Mich.

“There were people lined up on overpasses over the track as we went through Odell and more crowds standing trackside with their cameras as we went through Dwight and Pontiac,” said UTU Illinois Legislative Director Robert W. Guy.

“When we left Joliet there were probably 10 cameras of all types set up on tripods,” Guy said. “When we pulled into Normal there were eight more, and there was lots of newspaper and TV coverage on board as well.”

Guy said that after brief opening ceremonies on the platform at Joliet the four-car train, powered by a 4200-horsepower Amtrak P-42 locomotive at each end, cruised at the current track speed of 79 mph until it reached the PTS-protected territory at Milepost 73.6 at Dwight.

“It took several more minutes for the engines to accelerate the train to 110,” Guy said. “I would say we did 110 for five or six minutes. Then it was time to begin decelerating.”

In addition to the advanced signaling, which automatically initiates a train’s braking if the engineer fails to heed a red or yellow indication, the line has been rebuilt with continuous welded rail on concrete ties, a deep layer of ballast, new passing tracks accessed through high-speed turnouts, and “quad” gates that bar all lanes of any street or highway that crosses the tracks at grade.

IDOT and Union Pacific officials said the grade-crossing circuits have been re-timed to make sure all vehicle traffic is stopped by the gates 30 seconds before a train traveling 110 mph reaches the crossing.

Amtrak officials said they expect that regularly scheduled trains will be authorized to start operating at 110 mph over the 15-mile segment shortly before Thanksgiving.

Some $2 billion in federal Stimulus grants and State of Illinois capital funding is being used to upgrade 219 miles of the 284-mile route. Funding has not yet been identified for rebuilding and re-signaling the 38 miles of Canadian National Railway track between Chicago and Joliet or the 27 miles of Union Pacific and Gateway & Western trackage between Alton and St. Louis.

When all the improvements are completed, the current Chicago-St. Louis running time of 5 ½ hours is expected to drop to 4 ½ hours, making the train trip competitive with both auto and air transportation.

“A 21st-century rail system in Illinois will create jobs and drive economic development throughout the Midwest,” Gov. Quinn told the passengers and media. “This demonstration of high-speed rail service would not be possible without the unwavering commitment of President Obama, Sec. LaHood, Sen. Dick Durbin and many others. High-speed rail is coming to Illinois, and these long-term investments in our transportation system will benefit the citizens of our state for many years to come.”

“Can you imagine what kind of business that line will be doing in two years when the trains are doing 110 all the way from Joliet to Alton?” 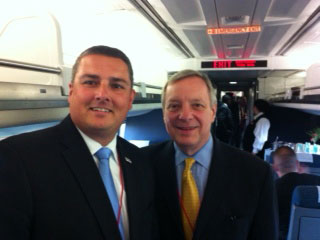 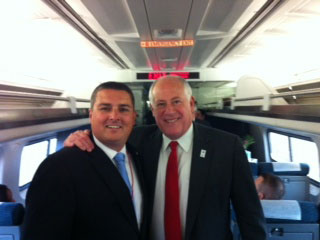