The appointment, which gives Guy a seat on the state AFL-CIO’s Executive Board, allows Guy to fill out the unexpired term of former Illinois Legislative Director Joseph C. Szabo, who now serves as President Obama’s Federal Railroad Administrator.

Szabo was elected to the AFL-CIO board when the UTU re-affiliated with the organization in 2006 and was re-elected to a 4-year term in 2008. Guy will serve out the remainder of that term until 2012. 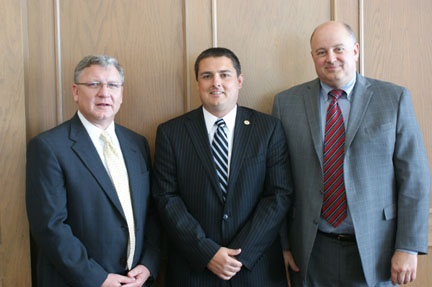 “I feel proud and humble in accepting this appointment,” Guy said. “Proud, because I get to work with an organization that represents one million unionized workers in the state of Illinois, and humble because I have to fill the shoes of a predecessor who served with such distinction that he was called to serve in the new presidential administration.”

State AFL-CIO President Michael Carrigan said, “We have been fortunate to work with Bob over the last five years in Springfield, first as a lobbyist and recently as state director for UTU. He is a true champion for members of the UTU and all working families in our state. He is bright, engaged, well versed in all labor, legislative and political issues, and well liked and respected by his peers. Bob is a class act and we are proud to have him on our Executive Board to replace Joe Szabo. That’s a big assignment, but I have no doubt he will succeed.”

Guy said having the UTU represented on the AFL-CIO executive board is critical to the missions of both organizations.

“Having the power of a million organized working people behind us makes the UTU stronger as we continue our fight for legislation that protects the health, safety, rights and well being of our members,” he said.

“And the UTU brings strength to the Illinois AFL-CIO as well. Our lobbying skills and our record of success in the General Assembly are widely admired and respected. In serving on the AFL-CIO Executive Board I look forward to working with some outstanding labor leaders to further our efforts in protecting the interests of railroaders throughout the state.”