DECATUR (Jan. 23)—When Indiana union members decided to protest so-called “right-to-work” legislation with an Occupy The State House movement they didn’t count on getting help from Illinois.

But they got some anyway, when the Decatur Trades & Labor Assembly dispatched a 16-passenger van full of local union members to stand with their brothers and sisters in Indianapolis.

“It was the painters’ union and us,” said Carl Draper, Legislative Representative of UTU Local #768. “The International Union of Painters and Allied Trades chartered the van, and three of us from the UTU went along to show solidarity with our brothers and sisters in Indiana.”

The group reported first to the office of UTU Indiana Legislative Director Kenny Edwards, then marched to the State House to join more than 3,000 Indiana union members and supporters.

“It was essentially an Occupy The State House movement,” Draper said. “And, yes, we got in. They allowed us in through one entrance, and we stood outside the House and Senate chambers while they were considering the legislation.”

Asked whether he felt good about Decatur’s spontaneous decision to send moral support, Draper said, “We do. It helps build unity in our local here in Illinois when we can join our brothers and sisters in a neighboring state. It shows we’re committed to something bigger than our own interests.”

UTU Illinois Legislative Director Bob Guy said what Local #768’s leadership did is exactly what the union movement is all about.

“It’s called ‘solidarity,’” he said. “It’s the oldest and most powerful principle in organized labor—workers standing together with others they don’t even know because they share a common interest.” 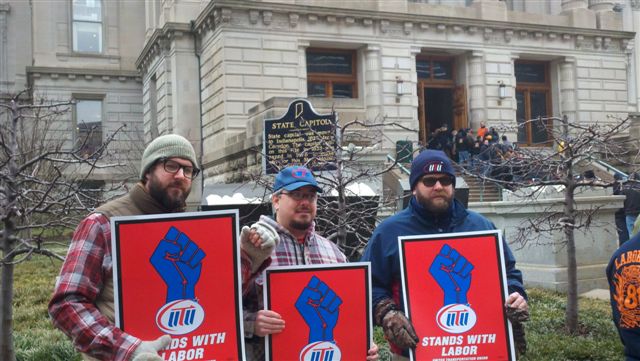