UTU Quadrennial Reorganization Meeting elects Guy to first full term as legislative director, 5 others elected to statewide posts–Szabo shines as keynote speaker and group honors Holman and Kortum for their many years of UTU service

SPRINGFIELD (Feb. 27)—Robert W. Guy was elected to his first full, four-year term as the UTU’s Illinois legislative director at the Eleventh Quadrennial Reorganization meeting of the union’s Illinois Legislative Board.

“I am humbled and thrilled to be elected to a full term in which I can serve our membership and advocate their interests,” Guy said following his election. “Although the Illinois Legislative Board has accomplished a great deal in the last three years, even more work lies before us. Thousands of fresh young employees entering a fast-growing industry are depending on us to help protect their safety, their health and their family life.”

Five other UTU officers were also elected to statewide posts:

Joe Ciemny, LR of Local #1534, was elected Assistant Director. Ciemny represents UTU members at CSX’s Barr Yard in Riverdale, where he was instrumental in helping former Illinois Legislative Director Joseph C. Szabo’s 2007 campaign to get the carrier to remedy its cramped and dirty crew-shelter facility. As a result of their collaboration, CSX overhauled the crew building, created additional locker space and stepped up cleaning and sanitation.

“I look forward to working with the new configured board to better educate, train and protect our members in Illinois,” Guy said.

“The Illinois Legislative Board is undergoing an infusion of youth as these younger LR’s move up to positions of greater responsibility,” Guy said. “That’s part of our strategy of maintaining a ‘deep bench:’ Younger officers are challenged to prepare themselves for quick advancement and more effective service to the members.

“And a younger legislative board helps the union do a better job of reaching out to the hundreds of fresh workers joining the rail industry in Illinois each year,” Guy said.

“I want to thank the UTU Illinois Legislative Board for the opportunity to serve them for so many years,” Szabo said. “The opportunity allowed me to meet, and work closely with, a young state senator named Barack Obama, beginning a relationship which would lead me on a path to become FRA administrator, and in doing so becoming the first administrator to come from the ranks of rail labor, and for that I owe the UTU a debt of gratitude.”

Closing out the evening was a ceremony recognizing the work of two long-serving members of the Illinois Legislative Board and the UTU. Retiring Secretary Dan Kortum, who couldn’t join the meeting, was recognized for his 37 years of service as a local officer, as well as his 30 years as local legislative representative and 12 years as secretary of the Illinois Board.

“I want to thank everyone individually for allowing me to serve,” Kortum said. “I believe that the Illinois Legislative Board is the most professional, effective and respected in the nation and I’m very proud to have been a part of it,” Kortum said in a prepared statement to the board.

Also recognized was Lloyd Holman, who was first elected chairman of the Illinois Legislative Board in 1996.

“I was thinking back about my time serving the UTU,” Holman said. “I added up all the years in which I held local or statewide office and it came to over 150 years. I am grateful for the opportunity to serve the membership of the UTU and proud of the accomplishments we’ve been able to obtain in Illinois for all railroad workers.”

Brothers Kortum and Holman were presented with brass lanterns for their distinguished longtime service to the men and women of the United Transportation Union. 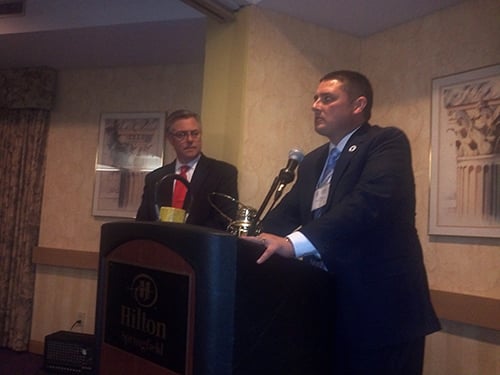 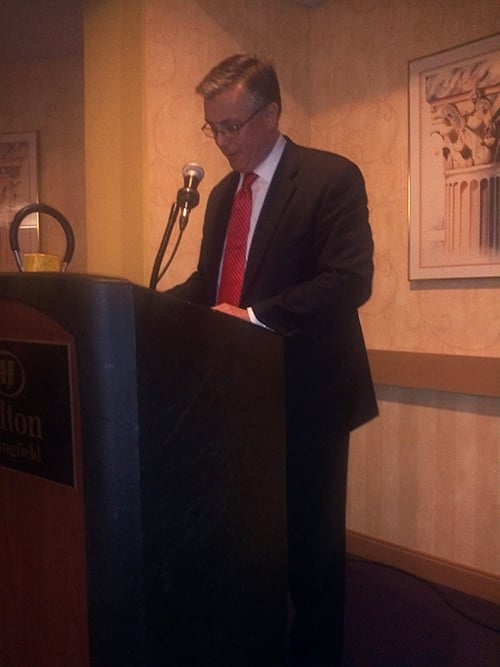