CHAMPAIGN (April 19)—Some twenty members of UTU locals from around the state came to Champaign today to protest an appearance by the Indiana governor who rammed through his state’s new right-to-work law.

But the UTU members were only one element in a much larger cohort of Illinois and Indiana union members who turned out to protest Daniels’s anti-labor message. A report in the Champaign News-Gazette said, “As many as 5,000 labor union members and supporters crowded into a corner parking lot at the University of Illinois Assembly Hall” to hear union leaders denounce Daniels’ agenda.

The report said 30 buses chartered by out-of-town protesters were parked in a separate parking lot. Police set up barricades around the hotel where Daniels appeared, and demonstrators were warned to stay off hotel property, but no incidents were reported.

UTU Local #768 Legislative Rep. Carl Draper of Decatur said he believed as many as 6,000 people made up the march from the Assembly Hall to the besieged hotel where Daniels spoke.

“I was looking at a line of marchers 20 people wide that stretched over a mile,” Draper said. “They were standing ten deep around the hotel on all four sides while Daniels was inside speaking, and there was another line ten deep standing on the other side of each of the streets surrounding the hotel.”

Photos accompanying the story showed ranks of demonstrators five deep filling the entire space between sidewalk and curb along one of Champaign’s principal streets. Many were dressed in red shirts and carrying signs protesting Daniels’s support for anti-labor legislation.

Illinois Federation of Teachers President Dan Montgomery told the demonstrators that research has shown right-to-work laws like those championed by Daniels “do not help the economy.”

“They do not grow the economy,” Montgomery said. “They do not bring business to states. What they do is lower the average wage and hurt working families.”

It was not the first time friends of organized labor turned out to protest an Illinois appearance by an anti-labor politician. Illinois AFL-CIO President Michael Carrigan pointed out that the protest against Daniels in Champaign followed a similar demonstration against Wisconsin Gov. Scott Walker when he appeared in Springfield on Tuesday.

“Doug Whitley of the Illinois Chamber of Commerce invited Scott Walker and his agenda to Springfield,” Carrigan said. “Shame on you, Doug Whitley, for endorsing Gov. Walker and his anti-union agenda. So the message for the one million women and men of organized labor in Illinois to Indiana Gov. Mitch Daniels is the same message that we delivered to Wisconsin’s Gov. Scott Walker on Tuesday: We don’t want and we don’t need your extreme anti-worker, anti-middle-class agenda here in Illinois.”

Draper, who also attended the rally against Walker in Springfield, said it was “very exciting to see so many people from Illinois stand against a governor who isn’t even from our state.

“Right-to-work is not an issue in Illinois, at least not currently,” he said. “Yet thousands of people from Illinois came out to protest against governors who are pushing an anti-labor agenda in a neighboring state. From all over the state they came to tell these governors, ‘What you did in your state is wrong. It won’t work in Illinois as long as we have a voice.’” 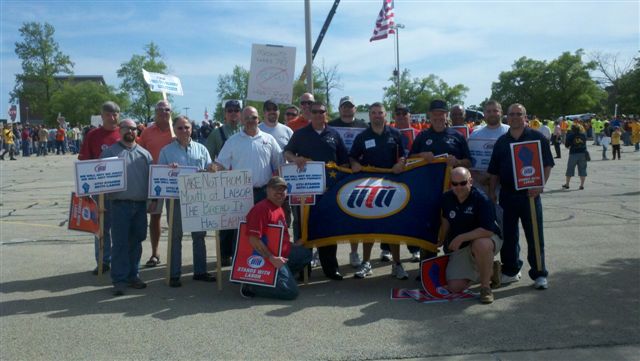 Members from UTU locals in half a dozen cities across Illinois converged on Champaign Tuesday to protest Indiana Gov. Mitch Daniels’s effort to sell his “right-to-work” agenda to local political leaders. The UTU team was only one element in a mass march and rally that numbered up to 6,000 demonstrators and stretched a mile through the city’s streets.