Tell Indiana Gov. Mitch Daniels how you feel about his new “Right-to-Work” law at big rally in Champaign April 19

But he could be making an even bigger mistake when he comes to Illinois April 19 to brag about it.

That’s because union members from across the state will be pouring into Champaign and demonstrating outside the venue where Daniels is scheduled to speak to the Champaign County Republican Party’s annual Lincoln Day dinner.

Several thousand members of organized labor and their families, along with students and other protesters, are expected to assemble in Champaign’s Hessel Park, 1401 W. Grandview Dr., between 3 p.m. and 4 p.m., at a rally organized by Right to Work Won’t Work in Illinois (RTW WWII).

From 4 p.m. to 5:15 p.m. the protesters will hear speakers explain why “Right to Work” laws deprive workers of their rights by making it impossible for them to enter into contracts with their employers.

Then they’ll march to the Hilton Garden Convention Center to protest outside while Daniels makes his speech to the dinner guests.

Some of the protesters actually will begin their day even earlier by attending a special workshop on “Right to Work” laws offered by the Labor Education Program at the University of Illinois’ famed School of Labor and Employment Relations.

That workshop, which costs $50 including lunch, will be held at the Hawthorn Suites Conference Center at 101 Trade Center Drive in Champaign. Information on the workshop is attached and is also available at www.illinoislabored.org.

“Indiana is the first state in the Rust Belt to pass a so-called ‘Right to Work” law, and we need to make sure it’s the last,” said UTU Illinois Legislative Director Robert W. Guy.

“Those of us who enjoy the benefits of a collective-bargaining agreement–including a living wage, a safe workplace, health care for ourselves and our families and a secure retirement–are living, breathing evidence that ‘Right to Work’ laws represent a false promise,” Guy said.

“The states with ‘Right to Work’ laws remain the poorest in the nation,” he said. “The Illinois Legislative Board urges every member who is not scheduled to work April 19 to join myself and other brothers and sisters protesting Mitch Daniels’ appearance.”

Facebook members can learn more about the rally at www.facebook.com/RightToWorkWontWorkInIllinois 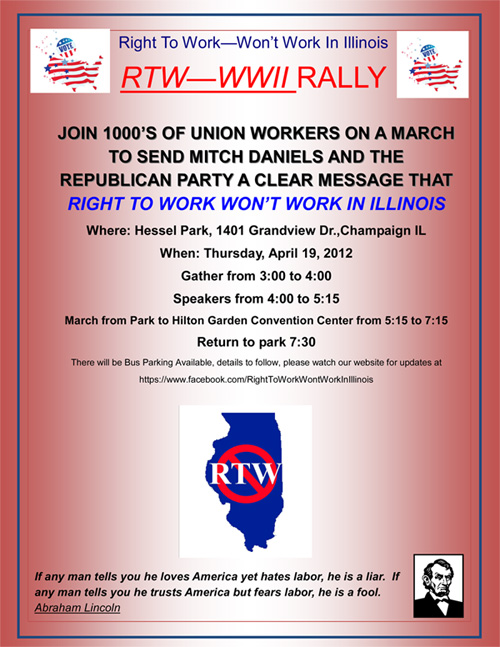