The nature of the shift Szabo called for is simple: It’s now O.K. to tell a fellow employee you’ve noticed him engaging in a distracting work practice—like talking or texting on a cell phone.

“I have spent my entire career in the railroad industry, and I know firsthand how distractions can lead to danger,” Szabo said during a rollout of the new program at the Union Pacific Railroad’s Proviso Yard.

“That’s why I’m calling on all rail-industry employees to adopt a zero-tolerance position on using electronic devices while working, building an even stronger safety culture where workers can confidently depend on one another to keep everyone safe,” the administrator said.

UP’s property was chosen as the site for the anti-distraction announcement because the FRA’s anti-distraction initiative is closely modeled on one already in successful use at that railroad.

“We call it “Courage to Care,” said UP spokesman Mark Davis. “It’s a peer-to-peer program in which employees are urged to intervene and caution any fellow employee they see engaged in an unsafe practice.”

Davis said Courage to Care represents something of an effort to change the code of manners in the American workplace, where commenting on a fellow employee’s conduct normally would be considered intrusive.

“Courage to Care subtly changes the emphasis from ‘I caught you breaking a rule’ to “I’ve got your back,’” Davis said.

“It’s not a program, it’s not a rule, it’s a commitment that encourages employees to look out for each other,” he said.

Davis noted that the Uniform Code of Operating Regulations already contains a rule—No. 2.21—that says once an employee arrives on the property he or she must turn off any personal electronic communication device.

“Courage to Care simply says that if you see a fellow employee using an electronic device on the property, you show concern for his safety by mentioning that you noticed him doing it,” Davis said.

“In fact, it can be applied to any unsafe practice used by any employee at any level, including an executive or officer,” he said. “I’ve already used it a couple of times with fellow employees here in the headquarters building in Omaha.”

Szabo cited his lifetime of experience in the industry to call for a change in the code of manners to encourage employees to warn fellow workers of dangerous and distracting practices.

“I’ve walked in your shoes and lost too many friends,” he said. “Momentary distractions can prove tragic. We have to change people’s attitudes by actively fostering a culture where the use of an electronic device is socially unacceptable.”

“USDOT has formally adopted the slogan ‘Just one text or call could wreck it all,’” Guy said. “That’s true whether you’re texting while driving a car or taking a phone call while manning a train.

“Fortunately, we railroaders have something most motorists lack,” he said:

“We work in a crew. We have a fellow railroader alongside us who can remind us our dangerous behavior before we cause an accident. And now we’re welcoming a cultural shift that tells us it’s O.K. to talk about it.”

Guy said the cultural change FRA and the carriers are seeking actually isn’t all that new.

“Ever since 9/11 the Transportation Security Administration has had signs in all the airports and all the railroad and mass-transit stations that say: “If you see something, say something,” he said.

“Courage to Care expresses the same kind of concern, only instead of reporting a potential safety hazard to a uniformed public-safety officer, we mention it to the fellow worker responsible for it. 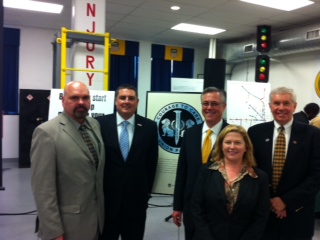