SPRINGFIELD (Feb. 29)—UTU’s Illinois Legislative Board wound up its two-day Quadrennial Reorganization meeting with some serious business as officials of the Federal Railroad Administration (FRA) explained a critical new set of safety rules.

After a welcoming address by Chicago Federation of Labor President Jorge Ramirez and Secretary/Treasurer Bob Reiter, FRA Region IV and VI representatives gave presentations. Especially compelling was Region IV Inspector Pat Graham, who put the roomful of UTU local legislative reps through a rigorous learning experience by stressing the importance of restricted speed and the consequences of not abiding by it.

“Under conductor certification, the conductor now has just as much responsibility for the observation of speed restrictions as the locomotive engineer,” said UTU Illinois Legislative Director Robert W. Guy. “Communication between members of the train crew has never been more important.”

Attending the meeting with Graham were FRA Region IV Administrator Mike Long of Chicago and Region VI Administrator Steve Fender of Kansas City, each of whom highlighted FRA’s efforts in implementing the new Conductor Certification regulation and the Risk Reduction Program.

Following adjournment of the business meeting the Legislative Board held a reception for members of the Illinois General Assembly at the Illinois AFL-CIO headquarters, with more than 50 legislators from both chambers and both parties attending.

“For many of the legislative representatives attending the meeting it was the first time they had a chance to meet the legislators whose work affects the health, safety and welfare of our members,” Guy said.

Guy said the exposure to members of the General Assembly was especially important this year because so many of the union’s LRs are young and new to their jobs.

“I was very impressed with the level of attention these LRs paid—especially the younger LRs–to the issues in the meetings as well as to the legislators they met,” he said. “They got a lot of information to take back to their members and met a lot of important lawmakers whose understanding and cooperation are going to be important to the progress of the union’s legislative agenda.”

Guy said the increasingly youthful profile of the union’s LR’s reflects not only the Legislative Board’s philosophy of cultivating talent as soon as it appears but also the need to make sure the LRs reflect the increasing youth of the membership.

“Railroading is not an old man’s profession anymore,” he said. “After a substantial dip during the recession in 2009, railroad employment is growing again, the carriers are hiring, and most of the people they’re hiring tend to be younger.”

Guy said the UTU now has about 5,300 working members in Illinois, and the average age of the membership is dropping as elders retire.

“These younger hires bring a lot of youthful enthusiasm and energy to their work, and we want to tap those qualities and make them part of our union leadership,” he said. “Take a look at the group photo from the Quadrennial Reorganization. You’ll see a lot of fresh young faces.” 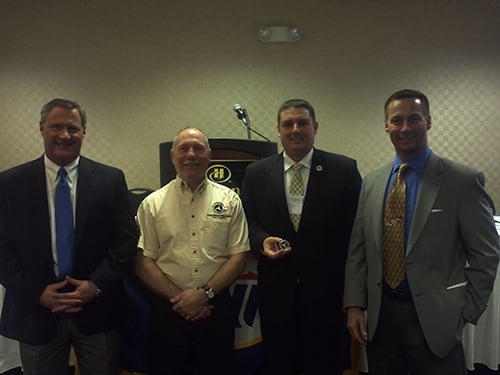 Note the many young faces in the current Illinois Legislative Board. The age composition of the Board reflects the increasing number of young people joining today’s expanding railroad industry. It also reflects the union’s policy of identifying and cultivating leadership potential as early as possible.