Local #1402 teams with Illinois Legislative Board, Illinois Commerce Commission to get action on UP yard walkways in Dupo and Madison

EAST ST. LOUIS (Feb. 28)—When UTU Local #1402 members noticed the walkways in Union Pacific’s yards at Madison and Dupo, Ill., getting dangerously out of compliance, they tried approaching management.

That was five years ago. It didn’t work.

Nor did it work in the four subsequent years. Local #1402 Legislative Representative Bill Mathes struggled vainly to get Div. Supt. Dan Witthaus to fix the problems the local had documented. The walkways remained uneven and surfaced with large chunks of mainline-size ballast rather than the smaller, more walkable ¾ inch stones specified in the Illinois Safe Walkways Act that the Illinois Legislative Board marshaled through the General Assembly in 2004.

For a while it looked as if improvements were coming.

“Twice they brought the walkway ballast into Madison Yard,” Mathes wrote to UTU State Legislative Director Robert W. Guy last April 22. “Once they actually dumped it on the ground to make sure the cars of ballast didn’t disappear [to be used on another project].”

But alas, the ballast still disappeared before it could be spread between the tracks at Madison Yard.

“The ballast was loaded into dump trucks and spread on the Church Street Industrial Lead in East Saint Louis,” Mathes wrote in frustration. The Church Street track, he noted, didn’t even need a good walkway because crews didn’t conduct any switching there. The track was used only to store coal trains.

Another load of walkway ballast came into Madison, but the hopper cars were only pausing on their way to Stallings, another storage track where crews performed no work on the ground. Essentially, the load was wasted when it was spread on a site where it wasn’t needed.

Mathes’s complaints went into high gear—and into the record–when he asked Guy to seek an investigation of the two yards by the Illinois Commerce Commission.

Guy acted promptly. In a May 4 letter to ICC Rail Safety Program Coordinator Mike Stead he requested an informal inspection be performed by the Commission to investigate tracks 1 through 5 in Madison Yard and four sites in Dupo Yard, with UTU and Union Pacific officials to be present during the inspection.

The inspection was conducted June 7. On June 18 Stead directed a letter to UP Dir. of Track Maintenance Jacob Gilsdorf documenting all of the walkway hazards of which Mathes had complained.

But the Commission discovered other, newer hazards had developed since the union’s petition.

In a particularly ironic violation, inspectors found that while UP had conducted a number of upgrades to make its yard tracks safer for trains, some of the track improvements had degraded the safety of the employees working on the ground. Rotten ties had been replaced, but fragments of the old ties had been left on the walkways, along with old tie plates, spikes and other leftovers from the upgrade. Some tie insertions had been left unballasted, leaving deep cavities that could cause an employee to trip and fall between the rails. And there were many long stretches where both walkway ballast and tie ballast were so thin that the tracks and walkways could not drain properly—always a problem on the low-lying and spongy east side of the Mississippi.

This time the UP acted. Within weeks of receiving Stead’s letter, the railroad dumped more carloads of ¾-inch walkway ballast at Madison and Dupo—and used it there. Eventually, all of the defects were remedied, all walkways leveled, all debris picked up.

“It took a lot of effort on everybody’s part, including Bob Guy and the Commerce Commission, but we finally got the desired results,” Mathes said. “We also have developed procedures and relationships to make sure that correcting walkway problems will be less difficult in the future. We got to meet Preston Lawless, a local UP MOW supervisor. I’ve got his e-mail, he’s got mine, and we can talk whenever there’s a problem. We’ve also developed an excellent relationship with Shawn Engel, the new director of train operations. We’ve had two meetings with him so far to discuss safety and other issues, and he’s got things fixed for us.”

“That’s how the system should work—under ideal circumstances,” Guy said. “But when communications with a railroad are not ideal, the union is the way to go. If members see unsafe conditions developing, and particularly if they are instructed by a superior to work in an unsafe environment, that’s something to be reported to the leadership of your local. They will bring it to the attention of the Illinois Legislative Board, and we will take it to the appropriate authorities for enforcement.”

Guy praised Mathes, a 38-year veteran of railroading currently on disability, for his persistence in pursuing Local #1402’s walkway issues to a satisfactory conclusion.

“As the turnaround at Madison and Dupo makes clear, a strong union with an active, alert membership is critical to workplace safety,” Guy said. “We have the law and a strong enforcement mechanism on our side, but those tools work best when we use our union power to activate them.” 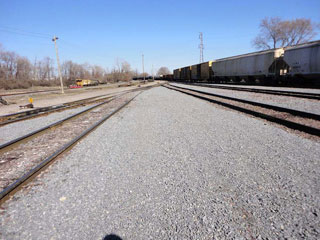 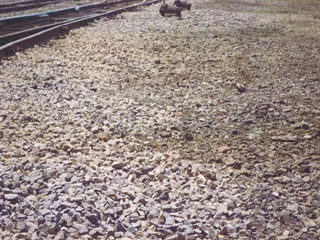 Madison Yard walkway after Union Pacific performed upgrade requested by UTU and Illinois Commerce Commission. Smaller-grain ballast suitable for walking has been applied and graded to a level profile.