CHICAGO (December 16)—Milton L. McDaniel Sr. grew up in Carbondale, IL., part of a large family that believed in hard work, dedication and family values. In 1967 Milton went to apply for a position as a porter with the local railroad, instead, on August 4th of that year he was hired as the first African American locomotive fireman north of the Ohio River on the Illinois Central Railroad.

So began his nearly 50-year relationship with and membership of SMART-Transportation Division and its predecessor’s, including the United Transportation Union (UTU).

On December 2nd, as part of the 100th Anniversary of the Great Migration, the ILHS honored Brother McDaniel by inducting him into their Union Hall of Honor, and SMART-TD was there to present Milton for induction.

“It was a tremendous honor and privilege for us to be just a small part of Brother McDaniel’s evening,” said SMART-TD Illinois State Director Bob Guy. “But for us to be able to introduce and present him with his honor, in front of his lovely family, is something we’ll never forget.”

2016 marks the 100th anniversary of the beginning of the Great Migration, when seven million African Americans left the rural South for the urban Northeast, Midwest, and West. The migration was an effort to find better economic opportunities for black workers and their families. The ILHS, in honoring Brother McDaniel and 3 others, recognized that effort and those workers who challenged work-place discrimination and who organized to build a more inclusive labor movement.

“I remember my very first union meeting, it was held at a bowling alley in East St. Louis,” said Brother McDaniel as he addressed the crowd after accepting his award. “We were all ordering food and drinks and I didn’t get served.”

“They originally said I was too young, but ultimately they stated that they weren’t going to serve me,” McDaniel recounted. “After finding this out my Local leaders stood up and directed everyone to finish up their drinks and that we were leaving that establishment and never coming back.”

“I was so proud of my fellow union members support,” McDaniel said. “I knew right there that I was part of something special and that being part of a union was something I was going to look forward to the rest of my career.”

In recognition of his induction into the Illinois Labor History Society Hall of Honor, Brother McDaniel’s hometown of Carbondale, in which he and his wife Corene cofounded the African American Museum of Southern Illinois, recognized his contributions to his community by declaring December 2, 2016 to be Milton L. McDaniel Sr. Day. The proclamation read, in part, “in becoming the first African American locomotive engineer north of the Ohio River, he tore down racial barriers, dispelled stereotypes and paved a previously untraveled road for men and women from under-represented populations in the North.”

“What a fitting tribute to a dedicated railroader who also set an example for those who followed him,” Guy said. “We, along with his family, are so very proud to call him one of our very own.” 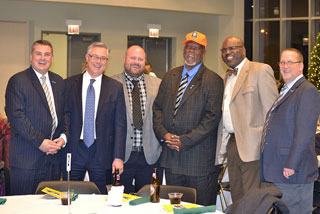