Tripping hazards—including potholes, sudden changes in degree of slope, excessively large chunks of ballast and pieces of debris—have not been permitted on walkways where train crews work on the ground since 2005.

That’s when SMART-TD’s predecessor, the United Transportation Union, got its pioneering Safe Walkway Rule incorporated into the Illinois Administrative Code.

Yet in mid-September of this year the boxes started popping up right on the centerline between pairs of ALS yard tracks. That’s exactly where employees walk–sometimes backwards and in the dark–as they sight down long cuts of freight cars. It’s where they communicate with other crew members before going between cars to make joints and execute pulls.

“Our members brought it up with ALS officials at a safety meeting, but the railroad did not see a concern with having the boxes in that position and basically said they were going ahead full-bore with the rest of the installation,” said UTU Illinois Legislative Director Robert W. Guy.

“We did a joint inspection of the ALS yard on October 1, and the ICC agreed the installation represented ‘new construction,’” Guy said. “While the Safe Walkway Rule does grandfather in certain obstructions and hazards that existed prior to 2005, it does not permit new ones to be introduced after that date, as Alton & Southern had been doing. The junction boxes installed right along the centerline of the walkway between the tracks clearly violated the rule.”

After discussion with the ICC, ALS officials settled the issue with a two-point correction: Existing junction boxes will be lowered as much as possible to align with the walkway surface by a gradual rise in the ballast surrounding them. All new boxes will be installed in the zone between the outside of the rail gauge and the end of the ties where employees normally do not walk (and cannot even reach when equipment is occupying a track).

Ironically, Guy said, the junction boxes are part of a new track-sensing technology that is likely to make yard work safer for employees on the ground.

“The sensors detect the presence as well as the location of railroad cars on each track so that the humping software is always aware how much space remains on each track,” he said. “That software controls the retarders to make sure cars couple at proper speed and tells the humpmaster when a track is full and cannot accept additional cars.”

As far as is known, Alton & Southern is the only railroad that has installed this type of sensing equipment in an Illinois yard. But Guy said the ICC, at his request, has contacted all railroads in the state to remind them that any new installations will be deemed non-compliant if elevated junction boxes are installed within the walkway.

Guy said the Commission is doing a great job—not only warning the railroads that they cannot create a new hazard when they install the new technology but also showing them photos of the new approved installation model so they can use it when and if they install their own track sensors, Guy said.

“The ICC’s informational outreach to the railroads is an essential part of the solution, as well as serving as great documentation at a later date if a carrier chooses to do so anyway” Guy said. “It was a great victory when the UTU got the Safe Walkway Rule incorporated in state statutes a decade ago, but we cannot assume that all railroad officials know about it or will comply with it today.

“Many of the officials working at that time have retired or have been reassigned out of state during the last ten years, and new officials have been hired or moved in from out of state who are not familiar with the Safe Walkway Rule,” he said.

“We cannot assume that the railroads will familiarize new officials with all the state regs they have to follow—especially the ones they don’t particularly want to follow. It’s up to the union to hold their feet to the fire, and that’s just what our members did in East St. Louis.

“They followed protocol by raising the issue locally first, but when they saw the installation was proceeding rapidly they notified my office so that I could contact the Illinois Commerce Commission, which in turn quickly scheduled the inspection that led to the order to rectify and correct the placement of the junction boxes. It was a job well done!” 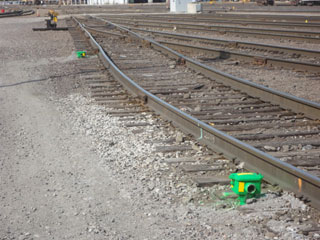 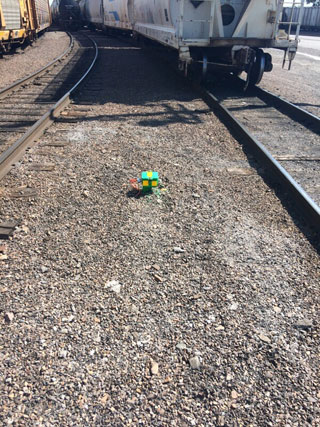 After SMART-TD alerted Illinois Commerce Commission inspectors to Alton & Southern’s violation of the Safe Walkways rule, ALS agreed to install all new boxes between the outside gauge of the rail and the outside of the tie footprint, as shown here.