The monument, erected after Mother Jones’s death in 1930, was restored following a fund-raising campaign spearheaded by Sen. Manar and the Illinois AFL-CIO that was launched in 2013.

Private donations totaling $75,000 were matched by a $43,000 tourism grant from the Illinois Department of Commerce and Economic Opportunity.

“It really felt good to see the monument to Mother Jones restored,” Guy said. “Some of the mortar had deteriorated, and the marble had begun to suffer from eight decades of weather, but now it looks the same as it did on the day it was dedicated. It is a fitting memorial to a heroine of organized labor.”

Mary Harris Jones was born in County Cork, Ireland, in 1837 but her family had to emigrate in an effort to survive the “Great Hunger”—the 1855-58 potato famine that reduced the Irish population from 8 million to 4 million. She received a good education while growing up in Canada and after moving to the United States she married and had four children, but her husband and children died in a yellow-fever epidemic that swept Memphis, Tenn.,in 1867. She moved to Chicago and prospered running a dressmaking shop, but her business was destroyed in the Great Chicago Fire of 1871.

During her days in Chicago Jones had become alarmed by the plight of working people, and after losing her dress business became a full-time labor organizer. Her strong voice and eloquent Irish delivery made her a popular speaker, and wherever she traveled, union membership began to grow, particularly when she appeared on behalf of the United Mine Workers. It was the miners who adopted her as their symbol and named her “Mother” in tribute to her leadership and loyalty.

But the same strengths and successes that endeared Mother Jones to miners alarmed the business community and conservative politicians. One of her critics called her “the most dangerous woman in America.” She was arrested and jailed many times but never failed to support working men and women, especially when they were on strike, locked out or subjected to armed violence by private security guards or local police.

That’s exactly what happened in October, 1898, when a major labor dispute came to a head in the little town of Virden, Ill., 20 miles south of Springfield.

The Chicago-Virden Coal Co. locked out hundreds of miners who had voted to join the United Mine Workers Union. Mother Jones came to Virden and, with the national press reporting her every word, defended the miners so eloquently that two trainloads of scabs sent to replace them refused to go to work and demanded to be sent home. Violence broke out, killing four hired mine guards and seven miners, but when the dust settled so did the company. The Virden mine became a union shop.

The bravery and determination of the Virden miners so impressed Mother Jones that she asked to be buried alongside them in their cemetery at nearby Mount Olive.

“When the last call comes for me to take my final rest, will the miners see that I get a resting place in the same clay that
shelters the miners who gave up their lives on the hills of Virden, Ill., on the morning of October 12, 1898, for their heroic sacrifice for their fellow men?–she said. “They are responsible for Illinois being the best-organized labor state in America.

“I hope it will be my consolation when I pass away to feel I sleep under the same clay with those brave boys.”

“Mother Jones got her wish and was buried in the Miners Cemetery in 1930,” Guy said. “I believe we in the union movement have honored her memory by making sure her monument will be maintained in perpetuity.

“Sen. Durbin has always been one of Mother Jones’s biggest fans,” Guy said. “He couldn’t help but note that if she were alive today she would be licking her chops to meet with our new anti-union Governor and would surely have a few choice words for him and his misguided positions.” 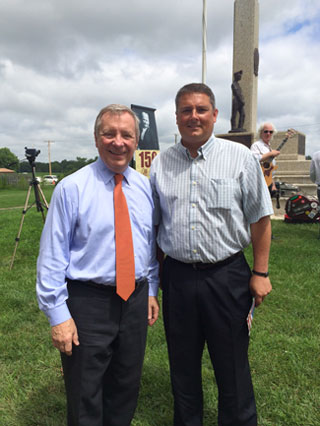