CHICAGO (March 17)—When award-winning photographer Jack Delano came to Chicago to document the jobs of railroad crews in 1942, he found a world that has largely disappeared: puffing steam locomotives, five-man crews, interlockings controlled by a man pulling huge manual levers on the second story of a “tower” next to the tracks, and conductors and brakemen who rode in a caboose heated by a wood stove and communicated with the engineer solely by hand and lantern signals.

But Delano’s photos, which will be on exhibit from April 5, 2014 through August 10, 2015 at the Chicago History Museum, also show a scene that hasn’t fundamentally changed over the last 72 years.

“The coal smoke and the mournful steam whistles may be gone, but the trains of today are even longer, heavier and harder to control than Grandpa’s trains,” said SMART-TD Illinois Legislative Director Robert W. Guy.

The working conditions, too, remain challenging.

“The summers are just as hot, the winters are just as cold, and the rain is just as miserable as it was in 1942,” Guy said. “Railroading remains basically an outdoor occupation in which the direction of the wind or the angle of the sun or a patch of ice next to a switch can critically affect your safety. Jack Delano’s photos display railroad employees and their workplace with total fidelity.” 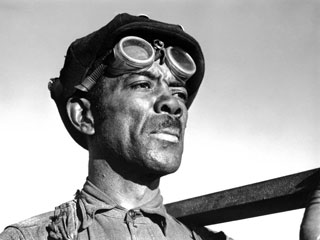 In an era when African-Americans were unlikely to get any railroad job except sleeping-car porter, Frank Williams was a highly respected carman for the Illinois Central in Chicago. Born in Mississippi in 1887. He joined the IC in 1908 and worked there continuously until retiring in 1960 after 73 years of service. Williams’s work ethic made him something of a legend on the IC, and so did his height: 6 feet, 5 inches. One of his sons became an IC conductor and a son-in-law was an IC switchman. Prize-winning photographer Jack Delano caught Williams in this workplace shot in November 1942.

The Chicago exhibit of Delano’s work was curated by the Center for Railroad Photography & Art, founded in 1997 in Madison, Wis. The not-for-profit organization strives to collect, preserve, catalogue and exhibit the finest railroad-themed photographs and paintings.

Unlike most of the photographers featured in the Center’s collections, Jack Delano did not specifically focus on trains. What fascinated him was the people who worked for railroads and the way they looked as they went about their work. The trains, stations, yards, block signals, water tanks and bridges formed the background.

Delano came to railroad photography by a roundabout route. Born in Ukraine in 1914, he emigrated to the U.S. with his family in 1923. As a youth in Philadelphia he showed early talent as a musician and received several scholarships to study music before taking up photography.

Then, during the depths of the 1930-1940 Great Depression, he found his real calling when he went to the coal fields of Pennsylvania to document the plight of miners who had lost their livelihood. His striking photographs of jobless miners and their suffering families caught the eye of President Franklin D. Roosevelt’s New Deal administrators, who hired Delano full time as a photographer for the Farm Security Administration and sent him on a cross-country road trip to document how rural Americans were struggling to save their farms from foreclosure and maintain their incomes as crop prices were plummeting.

Delano’s dramatic-yet-realistic photos were widely published in newspapers and magazines and immediately were embraced by the American public as faithful depictions of the nation’s character in one of its most trying periods. When the U.S. entered World War II, the Office of War Information ordered Delano out on another mission: to document the lives of American industrial workers—and particularly railroad employees–as the country went back to work and threw its industrial might into the war effort.

Delano focused primarily on Southern California, where he shot hundreds of photos on the Santa Fe Railway, and on the nation’s railroad center, Chicago, where he concentrated particularly on the Chicago & North Western, the Milwaukee Road and the Belt Railway of Chicago. As in his earlier work, Delano focused on the people, with the machines and scenery in the background. 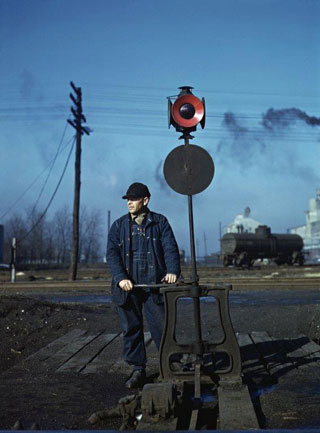 Using the new Kodachrome film that was quickly changing photography during the early years of World War II, Jack Delano caught Indiana Harbor Belt Line conductor Daniel Sinise as he was about to throw a switch in the company’s Riverdale Yard. In researching the railroaders in Delano’s photographs, the Center for Railroad Photography & Art learned that conductor Sinise was the grandfather of famed Chicago actor Gary Sinise, who honors his ancestor’s memory by keeping his gold railroad watch in a bell-jar on the mantelpiece. Delano’s railroad photos will be on display at the Chicago History Museum April 5, 2014 through August 10, 2015.

“He didn’t just take pictures of these railroaders,” said Center President Scott Lothes. “He collected their biographical information as well. Researchers from the Center were able to follow up on his notes and in many cases trace the descendants of Delano’s subjects. They were able to tell us things such as where these railroaders had been born, what ethnic group each one belonged to, where they lived, how many children they had, and how they spent their spare time.

“Every single one of the employees was hard-working and respectable,” Lothes said. “When they talked to Delano they seemed to be very proud of the work they were doing. He was in Chicago from November 1942 to May 1943, the very peak of World War II. U.S. forces had just begun to score their first big victories at the Battle of Midway and in North Africa, but it was not yet clear that we had turned things around and the home front was continually being urged toward greater effort. Railroaders knew the entire country depended on them: The troops, the supplies, the ammunition, the food—everything had to reach the front as quickly as possible and all the factories were working three shifts.”

Among the hardest-working railroaders Delano found in Chicago were Frank Williams, a 6-foot-5-inch African-American carman with the Illinois Central. His work ethic and personal code became so legendary that the Center’s magazine published a story about him, including interviews with his grandchildren, in its magazine last year.

Another subject Delano found was Belt Railway of Chicago conductor Daniel Sinise. Research proved him to be the grandfather of actor Gary Sinise, who keeps his grandfather’s old railroad watch in a bell-jar on the mantle.

“Delano was an extraordinary photographer who saw into the souls of railroad people and captured what he saw on film,” said Guy. “I urge all members to see this exhibit while it’s in Chicago. Even if you don’t live there, it’s worth taking a few days of free time to visit the city and see how vividly he brings railroaders and their work to life.”

The Chicago History Museum is located at 1601 N. Clark Street two miles north of the Loop. It’s open from 9:30 a.m. to 4:30 p.m. Monday through Saturday and noon to 5 p.m. on Sunday. Adult admission is $14, but Illinois residents may visit for free on certain Illinois Resident Discount Days. Parking is available a block north of the museum for $9.