CHICAGO (March 4)–Amtrak has announced it will honor former FRA Administrator Joseph C. Szabo by naming its Chicago Control
Center after him in a formal ceremony March 10.

In its official announcement of the award, the Amtrak Board of Directors said Szabo was being honored both for his longtime devotion to the cause of railroad safety and for his support for
Amtrak’s higher-speed development programs in the Midwest.

“Under Mr. Szabo’s leadership, rail safety regulation has embraced new approaches that will permit Amtrak and other passenger rail operators in the U.S. to benefit from lessons learned and equipment designs proven in services overseas,” the announcement said, adding: “Under his leadership, the U.S. Department of Transportation successfully implemented the High Speed Intercity Passenger Rail Program, whose investments will have lasting benefits for intercity passenger rail service.”

Between 1996 and 2009, when President Barack Obama named him Federal Railroad Administrator, Szabo served as Illinois Legislative Director for the United Transportation Union,
the former name of today’s SMART-TD.

“Although the award does not mention it, Joe’s work is one of the main reasons Amtrak today is so popular and successful in the state of Illinois,” Guy said. “During the years 2004 and 2005 Joe was the guiding force as well as the driving force behind the General Assembly’s decision to double the size of its state-supported passenger-train program, which since 2006 has more than doubled the ridership on the state’s passenger-train network.”

Guy said that during that period Szabo “criss-crossed the state multiple times” to persuade mayors, county officials, economic-development authorities, chambers of commerce and state legislators to support doubling the state’s appropriation for passenger trains so that each of the three Chicago Hub routes
would have at least two daily Amtrak round trips.

“And he orchestrated that campaign while continuing to perform all of his UTU duties, including securing passage for some of our most important safety legislation,” Guy said. “Very few people
could have advanced so many worthy programs at the same time.”

Guy said SMART-TD members should be particularly appreciative of Szabo’s achievements now that Gov. Bruce Rauner is proposing to dismantle them.

“In seeking to cut $16 million out of the state’s budget for Amtrak service, Gov. Rauner would force Illinois travelers to go back to a possible one-train-a-day schedule on the Chicago-Carbondale and Chicago-Quincy routes,” Guy said. “That move would eliminate a decade of progress, growth and success in Illinois passenger-train development.

“And in his increasingly inflammatory anti-union campaign, Gov. Rauner would seek to deny workers in other industries the kind of workplace safety and dignity that Joe achieved for us when he persuaded Illinois legislators to vote for safe walkways and crew vans and when he persuaded the railroads to replace their antiquated and dangerous crew shelters with modern locker rooms,
showers and lunching facilities,” Guy said.

Szabo, who served as FRA Administrator for nearly 6 years, retired earlier this year and returned to Chicago, where he joined the Chicago Metropolitan Agency for Planning (CMAP) as a senior
fellow in transportation analysis.

“I think I speak for all our members in expressing our gratitude to Amtrak for acknowledging and honoring Joe’s achievements on behalf of passenger trains,” Guy said.

“And our members can best honor him by urging their legislators not to support Gov. Rauner’s attempt to gut our state’s
successful passenger-train network. We owe it to Joe.”

See below for text of Amtrak’s announcement:

RESOLUTIONS OF APPRECIATION FOR
THE HONORABLE JOSEPH C. SZABO AND TO NAME
THE CHICAGO CONTROL CENTER IN HIS HONOR

WHEREAS, The Honorable Joseph C. Szabo, Administrator of the Federal Railroad Administration (FRA), has served as a member of the Board of Directors of the National Railroad Passenger Corpora­tion from April 2009 until December 2014, in his capacity as designee of the U.S. Secretary of Transportation­­; and

WHEREAS, Mr. Szabo is a fifth generation railroader who began his railroad career in 1976 with the Illinois Central Railroad, later working for Metra in a variety of roles; and

WHEREAS, Under Mr. Szabo’s leadership at the FRA, rail transportation has never been safer in the United States, culminating with two straight years of record-breaking safety performance with significant reductions in all types of accidents; and

WHEREAS, Under Mr. Szabo’s leadership, rail safety regulation has embraced new approaches that will permit Amtrak and other passenger rail operators in the U.S. to benefit from the lessons learned and equipment designs proven in service overseas; and

WHEREAS, Under his leadership, the U.S. Department of Transportation successfully implemented the High-Speed Intercity Rail Passenger Program whose investments will have lasting benefits for intercity passenger rail service; and

WHEREAS, Mr. Szabo has provided essential counsel, direction and perspective to the Amtrak Board of Directors and Amtrak Management as they have dealt with a wide range of issues; and

WHEREAS, The Amtrak Board of Directors wishes to express sincere gratitude to Joseph Szabo for his long-standing support of Amtrak particularly, and the national intercity passenger rail system generally; therefore, be it

RESOLVED, That the Amtrak Board of Directors would like to recognize Joseph Szabo’s many contributions to Amtrak and the special relationship between Joseph Szabo and the Amtrak employees who work in and around the Chicago area and on trains that arrive and depart at Chicago; and,

FURTHER RESOLVED, That the Board of Directors of the National Railroad Passenger Corporation hereby names the Chicago Control Center the Joseph C. Szabo Chicago Control Center so that the Amtrak passengers and Amtrak employees who pass through Chicago both now and in the future will be reminded of his longstanding and strong support of passenger rail service and Amtrak; and

FURTHER RESOLVED, That the Board of Directors of the National Railroad Passenger Corporation extends to Joseph Szabo on the occasion of his departure from the Federal Railroad Administration, the Board’s deepest appreciation and commendation for his dedication and commitment to public service; and

FURTHER RESOLVED, That the Board of Directors offers its best wishes to Mr. Szabo for continued success in his future endeavors. 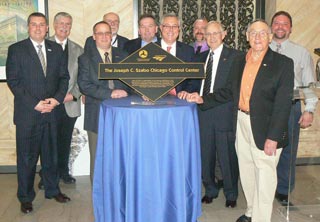