After trainee nearly falls from bridge, UTU gets walkway and railings installed

CHICAGO (June 7)—When a CSX freight train was forced to stop on the main line just south of Beecher, Ill., last fall, the conductor and a trainee did exactly what they were supposed to do—got out and walked their train looking for a defect.

But the inspection trip almost ended in disaster for the trainee. Not yet familiar with the railroad and unsure of his surroundings in the fading twilight, he failed to realize that his pathway was quickly changing from solid ground to a viaduct with a substantial gap between its two main-line tracks.

“He was walking between the tracks because it’s a double-track railroad and he didn’t want to be walking in the middle of the other live track,” said Local #1358 Legislative Representative Mark Pesek. “It’s a busy piece of railroad—about 20 trains a day..”

Walking between the two mains turned out to be unsafe because the double-track viaduct over 311th Street was of an older type consisting of a separate deck structure for each track with a 4-foot gap between the two tracks. Because the bridge essentially had no superstructure above the level of the ties, the trainee never even realized he was approaching a bridge until he stepped into the gap and began to slide toward the roadway 12 feet below.

“He only realized his mistake at the last second,” Pesek said. “He grabbed the end of a tie or something and pulled himself back up.”

When Conductor Joe Cottrell mentioned the incident to Pesek several days later Pesek made a point of taking a close look at the 311th Street viaduct the next time his work took him to the location. An eight-year veteran of the line, Pesek noticed immediately that the bridge had no handrails or walkways and no superstructure. It could be crossed on foot only by a person staying within the gauge, and in poor light it could barely be distinguished from the solid part of the railroad.

Pesek contacted Illinois Legislative Director Robert W. Guy to find out whether there was a statutory remedy for such a hazard. Guy said the answer was in Section 18-C-7401 of the Illinois Industrial Code, where Paragraph 5 reads, in part: “In cases in which the [Illinois Commerce] Commission finds the same to be practical and necessary for safety of railroad employees, bridges and trestles, over and upon which railroad trains are operated, shall include as a part thereof, a safe and suitable walkway and handrail on one side only of such bridge or trestle, and such handrail shall be located at the outer edge of the walkway and shall provide a clearance of not less than 8 feet, 6 inches, from the center line of the nearest track, measured at right angles thereto.”

Guy instructed Pesek to take a photo of the bridge, and Pesek complied. The photo he produced, even though taken in bright sunlight, showed a bridge structure so low and flush with the rails that a busy conductor walking his train could easily miss it in the dark.

Although Pesek and the crew that inspected their train that night are CSX employees, the former Chicago & Eastern Illinois Railroad main line over which they operate actually is owned by the Union Pacific, with CSX exercising trackage rights.

“Once he provided pictures I deemed it a high priority to get the situation addressed with the UP,” Guy said. “I presented UP with the documentation, and they agreed that the bridge was out of compliance due to the fact that it did not have the required walkway and handrail, and there also was an inherent danger of the middle of the bridge being wide open, which would allow an employee to fall straight to the road below if walking in between the tracks.”

UP officials immediately agreed the bridge was hazardous and agreed to remediation.

Once again, Pesek went to the scene with his camera and this time documented an entirely different situation. The gap between the two bridge decks was completely covered with an aluminum-cell walkway, and another aluminum walkway and a railing had been installed alongside the west track.

“This is a typical example of how our union helps build a safer workplace for our members,” said Guy. “It’s a bottom-up action process in which a possible hazard spotted by a member is reported to the Local’s leadership and then moved to the Illinois Legislative Board for follow-up.

“If you think you have identified a workplace hazard but aren’t sure whether it violates a state or federal law, don’t delay reporting it just because you’re not an expert,” Guy said.

“Report any situation that worries you immediately to your Local legislative rep so he can have the Board check it out. We know the law, and we know how to use it. The bridge at Beecher shows the system works.” 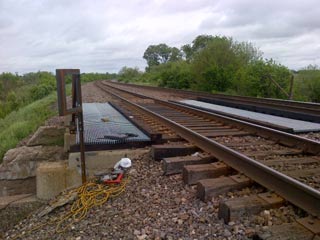 The double-track highway viaduct just south of Beecher where a conductor trainee nearly fell through the center gap to the highway below. 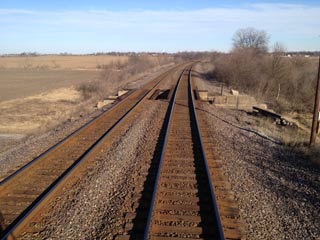 The same bridge today after the UTU took action: Owner Union Pacific installed both a side and center walkway as well as a handrail.