CHICAGO (Jan. 27)—Two years after the UTU Illinois Legislative Board first appealed for action, the Union Pacific Railroad is close to completing improvements that will bring its Bloomington Yard into compliance with the Illinois Safe Walkways Act.

In a January 9 e-mail to Illinois Legislative Director Robert W. Guy, Local #234 Legislative Representative Brian Hagele reported that virtually all safety concerns recorded by the union had been eliminated, with the exception of some modest mop-up items scheduled for completion when weather improves in March.

“New switches, track, ballast and drainage were installed,” Hagele reported. “The gang completely ripped out all track and ballast and replaced [it] with new material. We now have safer and better working conditions at the south end of Bloomington Yard. I am estimating the project is 85-90% completed.” 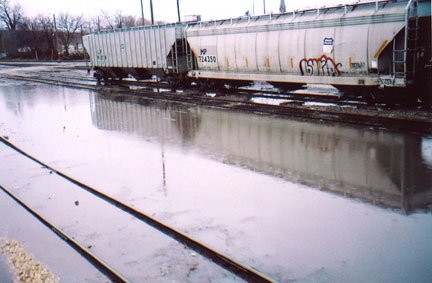 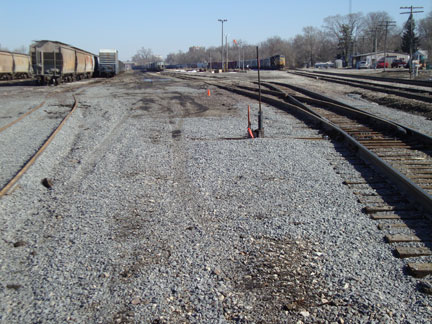 Guy said UP employees in Bloomington first alerted their supervisors to the hazardous condition of the yard more than two years ago, but their appeals went unanswered. The union became involved formally on January 11, 2008, when Guy directed a letter to UP Manager of Train Operations Steve Rutledge asking for a joint railroad-union inspection of the areas of greatest concern.

“Recent work on track #8 and #9 has left uneven footing, obstructions and a general lack of surface uniformity where employees are expected to work,” Guy told Rutledge. “Other walkway areas in the yard, predominantly at the south end, lack sufficient walking ballast. These areas can become hazardous during periods of precipitation due to the amount of mud that is created. Lack of ballast around switches also causes employees to routinely step in standing or frozen water to operate switches. This condition affects areas in between the rails as well, which become hazardous when employees need to tie air hoses, adjust couplers and hang rear-end markers.”

Guy noted in his original letter that at one point Bloomington Yard had four separate broken rails and only one Maintenance of Way (MOW) employee who, without an assistant, was expected to repair a long backlog of defects while trying to keep abreast of everyday routine maintenance.

“…local MOW employees, who seem to be overburdened and understaffed, aren’t given sufficient time to perform routine yard maintenance on top of their other main-line duties,” he wrote.

About 7 months later UP’s Rutledge joined Guy for an inspection of the yard. Guy followed up with a detailed 5-point letter documenting the hazards they had mutually identified, but the railroad still refused to commit to the necessary fixes.

Guy followed up with a December 18, 2008, letter asking Rutledge for a three-way meeting in which UP management, MOW and the UTU could determine a scope of work to be performed and time frame for bringing the yard into compliance. He also noted that since their last correspondence in August, two employees had been injured while working in the very areas where walkway deficiencies had but documented.

But as winter turned into summer with no acknowledgment by UP that the union’s concerns would be addressed, a frustrated Guy on July 16, 2009, asked the Illinois Commerce Commission (ICC) to become involved.

“After we contacted the ICC, the UP developed a plan to address the concerns we had raised—even before the joint inspection,” Guy said. “The ICC approved the plan and was adamant that the work was long overdue.

“It’s very gratifying to know that our brothers and sisters on the UP in Bloomington now have a safer working environment,” Guy said.

“The first lesson is that even when the law mandates a safe workplace, it takes a strong and experienced union to make sure management complies with the law,” Guy said. “I shudder to think what happens to workers who face hazards like Bloomington Yard without a union on their side.

“The second lesson is that it takes bottom-up initiative by the members to bring the union’s collective power to bear. The Illinois Legislative Board did not accomplish these improvements by itself. We acted because alert members became concerned about the lack of safety in their workplace and communicated their concerns to their local legislative rep, who got the union leadership involved.

“Our local members know better than anyone the risks and hazards that they encounter, so their involvement is crucial to addressing concerns with the workplace,” Guy said.

“Local #234 members were very vocal when relaying their concerns to local supervision and union leadership, and once the work was planned they made it very clear that they would not sit by and allow the work to be delayed or left uncompleted,” Guy said. “Brother Hagele and other members kept me and the ICC informed of the project’s progress—or the lack thereof. Their monitoring showed that the Bloomington Yard project was far too important to fall by the wayside.

“I commend Local #234 members for their persistence and patience,” Guy said. “They understood that when local members document the issues in a professional and timely manner, the complaint procedure works.”